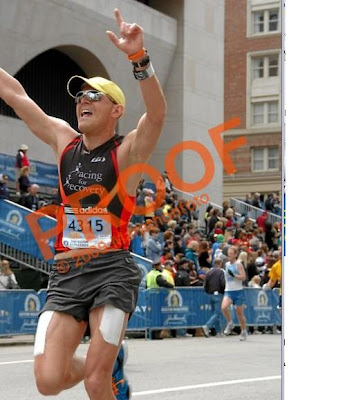 Friday April 17th we (Jen and I) departed for around 10am and arrived in around 4pm. We headed to the Expo first to get my race number and goodie bag. Going on Friday eve was so much better. We were able to walk around and see everything. I met Team Hoyt. These two are a true inspiration. One main thing I got was a free pace band from Nike. I had mine created for 2:59:00 so I knew what I had to run in order to make my sub 3 hour goal. We left the expo and headed to check in our hotel and get something to eat. Our hotel this year was downtown and much closer to the finish and the bus pick up. I would definitely stay here next year. Room was small but we did not mind at all.

Saturday April 18th. Got up and did a nice 2.5 mile run around The Boston Commons. It was nice to get out and run for a bit after being in a car all day Friday. After my run, the Jen and I headed out to see some sites of . We decided to tour the Boston Freedom Trail. This is a 2.5-mile trek through some of the most historic sites of . Jen and I had fun doing this. Although walking this much was probably not the best idea before a marathon, but I had all day Sunday to relax. The Freedom Trail was neat and at the end is . has a 600-foot monument at the top, which can be climbed with 294 steps. I decided to do this, not the best decision but I wanted to get some cool pictures of from this vantage point. After , we headed to Fenway to see the ballpark, then went to see the finish line, and then headed home. After we got back to the hotel, we relaxed for a bit and then head back downtown. I went back to the expo and Jen went to look at some stores. I went to the Expo because I wanted to get a massage stick since my legs were a bit sore. Climbing those steps was not the best idea it made my quads a bit sore and it tweaked my one calf that had been sore for the past couple weeks. Let us just say I was a bit concerned about how my legs would feel come race morning. So after Jen met me at the expo we headed back to the Hotel to get something to eat. After dinner, I went back to the hotel, relaxed, and iced my legs.

Sunday April 19th. This was a relaxing day. We slept in and then went to fro lunch and Jen wanted to see some stores. As I was going through my stuff, I realized I forgot the cradle to my Garmin GPS watch so I could not charge it. I was like what am I going to do? I quickly jumped on Runners World Forums and posted a message. Within a few minutes, I got a response and I was able to borrow a cradle. (Thanks Jay) After that went back to the Hotel and then we relaxed then we to dinner at Fire and Ice. This place is great we ate there last year. You pick the food you want meat, pasta etc and then they cook it on this large circular grill in the middle of the restaurant you can added sauces if you like also. This place is good and lots of fun. We finished eating and the head back to the hotel. Relaxed and iced my legs and got all my race gear together. The big race was the next day.

Monday April 20th. RACE DAY. Got up at 5am and got ready. Got all my stuff and headed to the buses. I met my friend Tim around 6am at the Buses and we boarded a bus on our way to the start. It was only a 5-minute walk for me to the buses. The bus ride was about 40 minutes. I ate my cookies and cream cliff builder bar and had some water during the trip. When we got to athletes village Tim and I found a spot under one of the tents and setup shop. This year I was prepared I brought a disposal paint tarp and an emergency blanket. I was able to find Jay and give him his cradle back. I had a bagel, some banana, and my red bull. I also was drinking a bottle of Gatorade lemon-line endurance. I relaxed and waited to get ready. Around 8:30am I began to get ready I got my races shoes and socks on. I lathered my feet in Vaseline to prevent blisters and I placed some Ben-Gay patches that I purchased on my quads and left calf. Took my salt tablets and an Aleve. I got all my nutrition loaded up into my racing shorts and my bib #on my racing jersey, got all my stuff together, and headed to the bag drop area. Once I dropped my bag, I headed to the starting line. I used the porta potty along the way. It was about 9:50am when I entered my corral the National anthem was playing and the F-16 did there fly over. I was ready to go. I got out of my warm disposal clothes and left my throw away gloves and arm warmers. The gun went off and it was time to race. The beginning of this race is incredible you have to be able to control yourself here because you can get caught up in the moment. As I moved up in my coral towards the line I said I had to myself I have to run my own race. I controlled myself at the started and was not caught up in all the excitement. The first couple of miles of this race can make your break you. You have to be careful not to go out to fast and also be patient and realize that the crowd will thin out a bit. These first couples of miles are some ups and downs so you have to take these hills as they come. As I was running these first couple miles I saw my pace was around 7:00 min a mile so I knew I was not out to fast or to slow. Around mile 5 the race begins to get in a groove, the road is a bit wider and runners are in their own groove. As I was running 6 CSX locomotives were riding next to the road blasting the horns I thought this was cool. I continued to run making sure to get 2 cliff shots in every 4 miles, 2-3 salt tabs, and an Advil in every 45 minutes. The race continued good for the next several miles. I could hear the screeching at around mile 12 and as I approached it, there they were all standing on the side of the road. This year I ran closer to the middle of the road so not to be sucked into the noise and cause my concentration to get shattered. As we exited the Wesley area, I knew I was almost halfway. At this point, two runners and I started to talk and they were trying for 3 hours. They stuck with me for a bit but they seemed to be struggling and I was running my own race either they could keep up or that was it for running with me. As I crossed the halfway mark I was averaging a 6:55 mile so I knew I was not on pace yet to break 3 hours. I went through at 1:31:05. After the half waypoint, I began to settle in even more. I knew I had to keep my pace around 6:55 in order to get to my goal. As the second half miles wind down you begin to get into the hills. As you come down the hill and make that right onto this is beginning of the hills. As I turned, the corner I looked up saw the sign and I knew this was it. I took the hills hard. I began to make my way up each one keeping my pace on target. I was making good work of these hills finally, I hit Heartbreak Hill. They call it this because it is the last in a series of hills. I do not think this hill is that bad it is just that it is a decent climb at 20 miles into the marathon. I made it over Heartbreak Hill and I looked at my pace I was 6:55 per mile. I knew this was the time to make my goal. I felt good coming out of the hills. My legs were a sore but I just opened it up. I began to make my way down the back of the hills. I was moving my pace began to drop as I clipped off miles. I got it down to 6:52 then around mile 24.5 I had it at 6:50. I knew I had to hold it here. As I entered Boston City Limits and made that right and into square, I was feeling good. I crossed that 1 mile to go mark and I knew this was now or never. As I made that final turn onto Boylston and see that 26-mile mark, I knew I could break 3 hours. With .2 miles to go I hammered it home and crossed the finish line in a time of 2:59:26. I had broken 3 hours. What a race. Temp was about 45 when it started and when I arrived in Boston is was 48 degrees. Perfect weather.

I crossed the finish line and I realized I had done it. I walked and saw Jen and then got my chip removed got my medal and my heat shield and then walked got my gear bag and put warm clothes on. I met Jen and headed back to the hotel and then went and got some food. It was a great day. Headed home on Tuesday.

The volunteers were great and so were the crowds. I had so much fun running the race it was a great time and a great weekend. The weather was perfect. Just do not climb 294 steps if you do not have to.

I also have the world’s best cheerleader Jen

If I compare this year to last year I know the differences. Hydration. I was fully hydrated this race. I was grabbing Gatorade at one aid station and water the next. My GPS watch this helped me pace myself and run my own race. Also taking salt tablets was a bit help this kept me hydrated. Also if I look at my mileage compared to last year I ran more then a 100 miles more training and averaging at least 50 miles a week for the 13 main training weeks. 16 week total training and 3 week taper. I concluded that all the mileage pays off when you get into the latter part of the marathon.

I will return next year.

Nice report and excellent run! Congratulations on breaking 3 hours! I'd be careful with Advil during (any) long run though; as far as I know it may have a bad effect on one's kidney function.

Bert, thanks for the comment. I usually do not take advil when I race it was just that I was having some pains in my quads. That was the first time I used advil during a race and I do not plan on doing it in the future.

Congrats, Mike! I liked reading about your race day experiences. You're an inspiration to people who set high goals and work their butt off to attain them.