So the cast is off. My scars look good and now it is time to allow the foot to return back to normal. I am able to walk with my crutches and I can put some weight on the bad leg but not 100%. Each day it feels better and hope to be off the crutches in a couple weeks. Slowly getting there and will keep everyone updated. Enjoy your Sunday.
Posted by doyoutri at 12:19 PM No comments:

Well my post on The Social Network got positive feedback so I have decided to focus more time to the blog in the future. As most of the my fans know I usually post everything on Facebook and I do a blog post once and awhile. Well I have decided to change that. I am going to being using this blog more to keep all my fans updated on my rehab and back to running again. I will still be on Facebook but not as much as I used to be so make sure you follow me here.

So what is the update on my leg?

I hope to get my cast off tomorrow and I will know more. Enjoy the snow.
Posted by doyoutri at 11:28 AM No comments:

This movie I must say was done very well. It was neat to see how Facebook came to be. If you get a chance you should see it. It also expressed a good point that Facebook is making everyone too connected and that people seem to online all the time.

Most people who read this post will be reading it because I set it up to link through facebook and post in my notes. Most people do not know that this blog (www.doyoutri.net) was setup long before facebook became as big as it has become.

Facebook has allowed my blog to grow but it also has taken away since people do not go to blog directly rather they just read it on facebook.

Also the part of my blog was to keep people updated on what was going on in my racing and training so going forward I am going to begin using my blog more for updates and less on facebook. I feel that being too connected can have its downsides and as a result I want people to follow my blog rather then just reading it on facebook.

So as for an update on my injury. I hope to be out of this cast later this week and into a boot where I hope I can walk without crutches in a couple weeks. I cannot wait to drive again also. I am glad this winter has been so cold because I know that I would not be loving it.

Chillin with my cast

Well cast is still doing well. Hope to get it off next week and into a boot. I will keep all my loyal fans posted on my recovery. I will be putting my cast on eBay for auction. I will post a link here once it is up. Enjoy the snow.
Posted by doyoutri at 11:44 AM No comments: 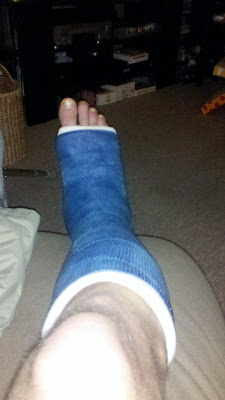 Here is a picture of my nice blue cast. Getting better on the crutches and moving around with it. Hope to get it off the end of the month. Thanks for all the well wishes and support.
Posted by doyoutri at 1:09 PM No comments:

So how did I break my leg?

Well I went for a run just like I normally do. It was snowing a bit but that has never stopped me from running. I run in all weather. So I was taking my normal route. As I was running I began to notice some water run off that had frozen. So I went around it I was on more ice that I could not see and that was it. I tried to stop to get off the ice and the next thing I knew my right leg was behind me I heard a snap and pop and I fell. I knew I was hurt and when I looked my right foot was 90 degrees to the right. So I reached down and turned it back straight so I could move. I knew I could not stand up and my ankle was full off blood and swollen so I began to drag myself onto someones lawn as I was crawling on this lawn and guy came out who happened to be an athletic trainer. At first he did not think I was hurt then I told him I needed help. He came over and checked me out. At the same time the other person home got the car and they both helped me into their car. They drove me home to grab my phone and keys and then continued to the ER. The ride took forever since there was all kinds of traffic and finally we got to the ER and it took only 25 min. I was in all kinds of pain. Once I was admitted they gave me meds for the pain and put my ankle back in place and then they told me I would have surgery in the morning. The surgery went well and now I am on the mend :)

now you know the story
Posted by doyoutri at 4:16 PM 1 comment:

Anyone know a good place to get rid of old running shoes? I know there are places online and such but most of them are away and would have to ship them. I would like to donate them and know that they would be used for a good cause. if you know of a shoe drive or you want them let me know.
Posted by doyoutri at 4:13 PM No comments:

All my 2010 files are updated. Race results, training log and total mileage. Feel free to take a look. Going to sometime before I start with the 2011 log. I have a blank copy if anyone needs one. Enjoy the brisk winter weather.
Posted by doyoutri at 3:30 PM No comments:

Well if you take a look at this blog and see the background you are probably wondering what that image is. Well it is my right leg. Yes i broke the fibula and had to get 7 screws and a plate in my leg. I am currently in a cast but I will be back running in no time just need to heal up.

So what happened. For all those who do not know what happened. I fell running and the next thing I knew my leg was broken. If you want to hear the full story drop me a line or leave a comment and I will explain more. I will be updating my blog with all my year end stuff and other odds and ends as I get better. Enjoy the new year.
Posted by doyoutri at 3:54 PM 1 comment: