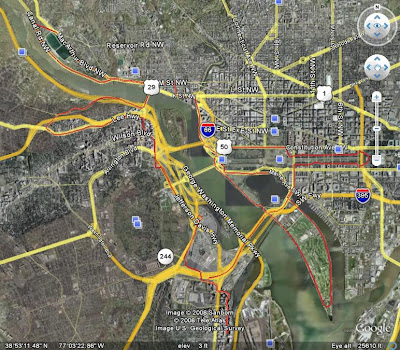 A personal best here at the Marine Corps Marathon. This was a great race. The weather could not have played out any better.

The Day started at 4:30 as we awoke and began our day. A red bull, cliff builder bar and a bagel. Got dressed and we were out the door by 5:20am. We drove to the metro and then we headed to the race. We arrived at the pentagon around 6:15am. There was a steady line of people who took the mile trek to the village where we got ready for the race. It was a nice 47 degrees and it was damp and cool and dark. It was nice to be with a group of people (Ben, Kristi,Lori and myself) all expect myself were running their first ever marathon. We did the normal prerace routine. Got ourselves ready to run we drank our water and got our last bit of nutrition into our systems. We then headed to the start line. I dropped Ben, Kristi and Lori off at the 4:30 time marker and I made my way to the 3:00 mark. I was almost all the way at the front. I stood around and kept my warm clothes on as long as I could with about 90 seconds to go i shed my sweats and it was time to run. The gun sounded and we were off. The first mile was not that bad some weaving and bobbing to get into a groove. After the first mile there was a decent hill but nothing to bad. It was a nice start to the race. Around mile 2-3 I saw Jen and Cara which was cool and then we were off towards Georgetown. This part of the course was cool we ran along an old canal and it was foggy and there was no one around it was kinda peaceful. Once we did this we took a turn climbed a hill and we headed into Georgetown. Once into Georgetown there were people all over this was nice because it had been quiet for awhile. After we ran through Georgetown we headed towards the Potomac river. We ran along the river for awhile this was cool and there were some points where it was quite again. Once we came off this peninsula we were were in downtown DC. It was cool to run around all the historic places. I saw the Lincoln Memorial, The U.S Capital, The Washington moment, just to name a few. Once we did our loop through DC we head back across the Potomac. We did a loop around a small part in VA and then started for home. running by the Pentagon was cool. After running by the Pentagon it was only about 2 miles to home. It was a flat part and then a quick uphill to the finish. It was awesome to hear all those people cheer as I made my charge for the finish. I got my medal and then my picture taken by the Marine Corps Memorial. Jen found me and I got changed and we walked around got some food and then we waited for the rest of the crew to finish. This was a great race.

I set a PR with this race. I nailed the nutrition and hydration perfectly and all the training paid off. This was a race that had so much support and it was fun. I would recommend this race to anyone and I will run this race again.
Posted by doyoutri at 5:31 PM

Great write-up Mike. I felt like I was there. I'm amazed you could drink a Red Bull before a race. I did it once during a Tri and my stomach hurt for the whole race.